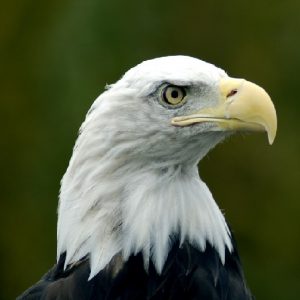 Winter is one of the best seasons for viewing bald eagles in North America. Many of the best locations are found along both coasts, major rivers, and migratory bird flyways. The following list includes a few areas where bald eagles may be seen.

Along the St. Lawrence River, eagles are often found at, Wellesley Island State Park, Brockville Narrows, and other locations.

The first refuge established for the protection of bald eagles, Mason Neck National Wildlife Refuge is a leading place to try to spot them. The refuge lies along a section of the Potomac River that is a breeding and resting area for bald eagles. The Great Marsh Trail offers a good overlook from November through March, when eagles are building nests and laying eggs.

Yellowstone National Park is one the most famous areas in the USA for bald eagle watching. Eagles can be seen all year in Hayden Valley and along the Madison River. During the winter, bald eagles are usually present along the Gardiner River.

At Upper Mississippi River National Wildlife and Fish Refuge, bald eagles sometimes number in the hundreds as they hunt the open water below the river’s locks and dams. The refuge surrounds the lock and provides excellent viewing opportunities. Bald eagle numbers peak from January through March. The refuge holds the Clinton Bald Eagle Watch in January.

Winter is best time of the year to see bald eagles in much of the Pacific Northwest. By December or January, migrating eagles arrive at their wintering grounds.

Bald eagles feed on waterfowl and fish where the Nisqually River meets Puget Sound. Washington is one of the largest eagle nesting sites in the country.

In winter, resident and migrating bald eagles feed on waterfowl and fish along the Columbia River. Eagle populations can vary, depending on the Columbia salmon runs.

During the winter season, bald eagles can usually be found in Whiskeytown-Shasta-Trinity National Recreation Area (Shasta and Trinity lakes).

Where To See and Photograph Bald Eagles

As an Amazon Associate we earn from qualifying purchases.